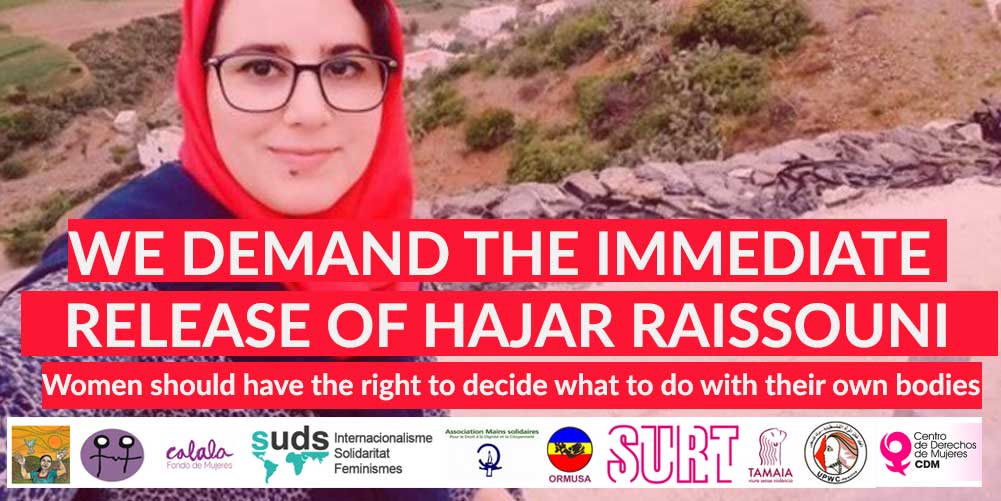 After the abusive detention in which Hajar Raissouni remains with those who accompanied her on Saturday, August 31, 2019 in the Agdal neighborhood of Rabat and after his presentation before the judge in detention on Monday, September 2, 2019 accused of corruption, of Illegal abortion and complicity in performing the abortion: they were imprisoned while their trial was postponed to September 9, 2019. We have been following this case and its consequences at the media level and at the legal level, which announces a regression of human rights as well as the human rights of women. This is a fierce offensive against the achievements for which the feminist and humanitarian movements in Morocco have fought so much.

The networks together with the associations and signatory activists of this statement, declare that:

1. The violations of the law and human rights that this flagrant detention implies that has nothing to do with the 21st century Morocco to which we aspire: a Morocco of law, a Morocco of modernity, democracy, security, freedom and equality as stipulates the first section of the constitutional document. This arbitrary detention not only devastates the basic freedoms and rights contained in the second part of the Constitution such as: equality and parity between men and women, as well as the right to non-compromise of physical and moral integrity, the right to privacy and the right not to secretly violate privacy in communications (articles 19 to 25). However, this detention profoundly reduces feminist demands and buries the initiatives developed by some constitutional institutions in these areas such as the National Human Rights Council and the Economic, Social and Environmental Council.

2. Equality between women and men, individual freedoms (especially those related to the right of women to appropriate their body and their freedom to do whatever they want with him) and the building of a democratic State and society and modern are no longer a struggle that only concerns only Moroccans, since they are a struggle of all of us, whatever our ideological beliefs. Any dispersion at the legal level and when taking measures that concern the protection of individual and collective rights, of equality and parity between men and women, will be detrimental to women, these being the first potential victims.

3. Regressions regarding freedom of expression and the right to disagree, through the imposition of a police perspective towards matters of opinion, are dangerous. We have the feeling of a return to the “lead years” with arbitrary charges and the persecution of those who have different opinions damaging their reputation or defame them.

On the one hand, we alert the State to the danger that the people are running through the application of security mechanisms and the oppression of their freedoms and rights. On the other, we invite all feminist associations, human rights and democratic development associations and all living forces that are jealous for a rule of law, and a modern and democratic society to face this episode of repression, which is living our country, with peaceful and civilized methods.

We strongly condemn the arrest of journalist Hajar Raissuni and those who accompany her. We also reject the manner in which the arrest and leakage of the medical report took place, which is to be considered as a visceral blow to the principle of professional secrecy and as a dangerous violation of the right to protection of people’s intimate life and of the personal freedom of individuals which guarantees article 446 of the Moroccan penal code and law 453 regarding the protection of personal data and privacy. We also condemn and reject the content of the statement from the Attorney General’s Office which illustrates and explains such infractions.

We declare our claims to national public opinion:

1. The immediate release of Hajar Raissouni those who accompany her.

3. The Government and Parliament have to fulfill their obligations and their commitments by enacting fair criminal laws for women. That these laws protect them from discrimination and violence, that decriminalize abortion; that guarantee women the right to voluntarily terminate a pregnancy, the absolute right to govern their body and respect the right to establish a consensual relationship between two adults without the interference of the law or society in observing this right.

The networks, associations and signatory actors in this statement.