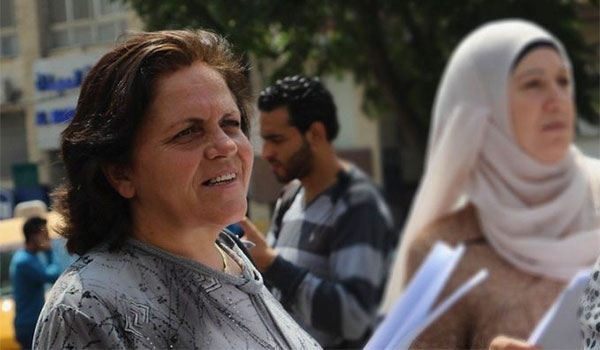 We demand the immediate release of Khitam Al-Saafin, president of the Union of Palestinian Women’s Committees – UPWC

In the early morning of November 2nd 2020, the Israeli army raided the residence of Ms. Khitam AlSaafin, president of the Union of Palestinian Women’s Committees -UPWC, in Betunia (West Bank) and proceeded to her arrest. The arrest takes place along with several other Palestinians detentions during early dawn raiding operations around various areas in West Bank.

Ms. AlSaafin, 59 years old, is being held in Hasharon Prison. In her court hearing that had been postponed from November 5th to the 9th, she has been sentenced to 6 months of administrative detention.

The UPWC is a grassroots organization, made up of thousands of Palestinian women that promotes human rights while struggling for a Palestine free of occupation. Khitam AlSaafin, as president of the UPWC, secretariat member of the General Union of Palestinian Women and well known feminist activist, is the visible face of thousands of women and contributes with her work to document the consequences of Israeli policies and violations against the Palestinian population and women. Her work is framed within the definition of the European Union in its Guidelines on Human Rights Defenders: “Human rights defenders are those individuals, groups and organs of society that promote and protect universally recognised human rights and fundamental freedoms. Human rights defenders seek the promotion and protection of civil and political rights as well as the promotion, protection and realisation of economic, social and cultural rights”.

The Union of Palestinian Women Committees in its work supporting and defending women’s rights- received funding from the European Union and continues to receive support from other international cooperation agencies and/or organizations and institutions from Spain, Norway or Sweden.

– Request information from Israeli authorities and visit Ms. AlSaafin so that her safety and physical integrity can be confirmed
– In case that a trial or a new judicial hearing is held, attend it as observers
– Inform the European Commission on the situation of human rights defenders in Palestine and the specific, periodic and systematic persecution against UPWC and other Palestinian Human Rights Organizations, in order to request an end to the harassment against Palestinian human rights defenders, the cessation of the use of the instrument of administrative detention and the release of all human rights defenders currently detained under this legal figure.